Clwyd hands over the baton to Glamorgan as RWAS feature county 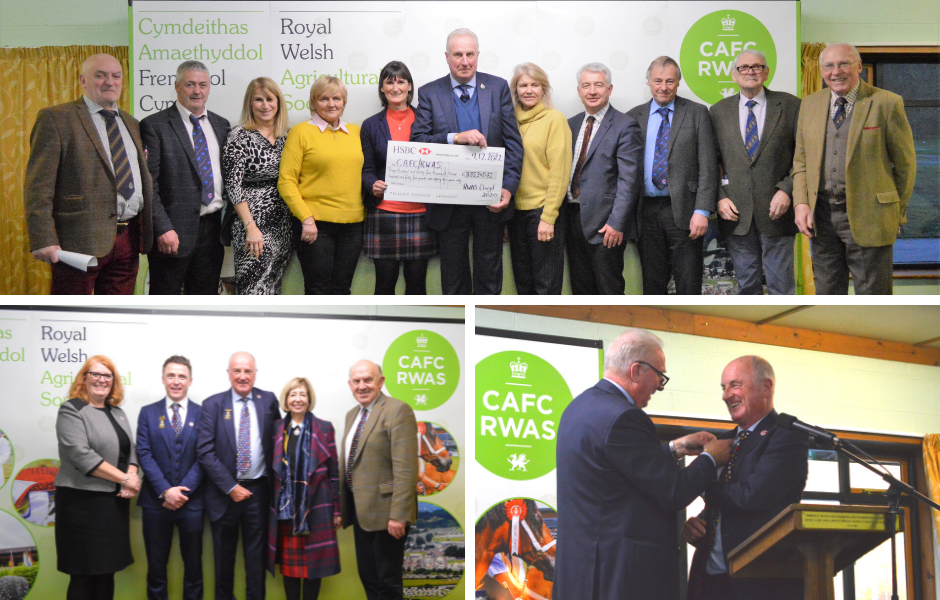 During the annual meeting of the Royal Welsh Agricultural Society Council on Friday 9 December, Clwyd’s remarkable period as feature county came to an end as Glamorgan took on the role.

Ably led by President, Harry Fetherstonhaugh, Clwyd began their journey over three years ago. Due to the coronavirus pandemic, the feature county year was deferred from 2020 to 2021 and then finally to 2022. Throughout that somewhat unstable and difficult time, Clwyd have continued their role with unfazed enthusiasm and dedication.

“When I was asked to be President, I looked forward to an exciting year, little did I know that I was signing up for a semi-permanent role!” said Harry Fetherstonhaugh in his final address as President to the Society’s council members.

Harry expressed his gratitude to the Society for bestowing on him the ‘enormous honour’ of being President. “I can assure you that this has been a truly significant highlight of my life.”

The funds raised by each feature county underpin the capital investment on the showground site.  These essential funds contribute to the maintenance and development of the site, which is one of the Society’s greatest assets. In recent years the Society has moved towards restoring and renovating existing buildings, which is becoming increasingly important in the current climate. During their time as feature county, Clwyd have fundraised for solar panels, an excellent example of sustainability.

Harry Fetherstonhaugh officially presented a cheque on behalf of the Clwyd Advisory Committee and feature county of £335,345.82 to the Chair of Council, Nicola Davies. “You have led with your known style and humour and I could not have had a better President in my first year as Chair of Council. Your decades of commitment to this Society is astounding and you always have the Society’s interest at heart. Although stepping down as President, I’m pleased to note that Harry will remain as our Vice Chair of Board for the remainder of the term.

Clwyd Advisory Committee can be very proud of themselves.  Led by their Chairman; Richard Tomlinson, the Secretary; Ruth Davies and the Treasurer; Nigel Davies. Thank you and all your committee members for your tremendous work over the past three years.” Nicola said.

Receiving a vote of sincere thanks from Nigel Davies, Lowri Lloyd Williams was also praised for all the commitment, enthusiasm, and energy she brought to the role of Ambassador. Nigel described Lowri as the ‘beating heart’ of the Clwyd team and an integral part of their fundraising efforts.

“It’s been very special to be part of the Clwyd team. We’ve worked so hard and pulled together over the last few years. Through teamwork and determination, I think we have demonstrated the strength of the Society, and what can be achieved by its members.” said Lowri.

Following in the footsteps of Clwyd, it is now the turn of Glamorgan to take up the mantle for the forthcoming year of 2023, with John Homfray leading from the front as President.

During his introduction, Honorary Winter Fair Director and Glamorgan committee member, William Hanks, praised John Homfray on his thriving mixed farming business in Cowbridge and his successful endeavours in diversifying with a restaurant and farm shop.

John Homfray has previously been the Chair of CLA Cymru (Country Land and Business Association), committee member of Bridgend Samaritans, Chair of His Majesty’s Parc Prison Monitoring Board, Chair of Glamorgan Farmers Club and is currently a Governor of Cowbridge Comprehensive School and Chair of their trust.

“The Homfray family have been loyal supporters of the Glamorgan Advisory Committee for many years and John, along with his wife Jo, and the whole Glamorgan team are really looking forward to an exciting year ahead. John has been President Elect for a very long time but has remained enthusiastic and dedicated throughout.” said William.

In accepting the presidential role, John said, “I was enormously flattered to have been chosen by our Advisory Committee as the feature county President back in March 2019. I have greatly enjoyed our involvement so far with RWAS. This is a truly wonderful institution.”

The feature county team hopes to fund the refurbishment of the Glamorgan Hall, installing a new roof and cladding. With many events planned for 2023, the committee are also working behind the scenes to organise the agricultural demonstration day, ‘Regen ’23’, to be held on 8th June at Sealand’s Farm in the Vale of Glamorgan. The event will cover 600 acres showcasing the very best of Welsh agriculture and how regenerative and progressive farming systems can help overcome the future challenges facing Welsh agriculture.

Also taking over the reins is Jacob Anthony, who has been officially elected as the Ambassador for Glamorgan’s feature county year, introduced at last week’s Council meeting by Glamorgan Advisory Committee Secretary Charlotte Thomas.

“We are truly grateful to have Jacob in such a prestigious role as our Ambassador. Jacob is the fifth generation on his family’s beef and sheep farm in Bridgend. He is passionate to promote all aspects of agriculture with his hands-on understanding of the industry and we are very confident that the Society is in excellent hands with Jacob as Ambassador for 2023.” said Charlotte. The unique structure of feature counties and Advisory Committees is what sets the Society apart from others and ensures that the people of Wales retain ownership of the events. The fundraising efforts of all the counties have been invested back into the showground, making it one of the finest in Europe and creating a real sense of shared ownership of the site.