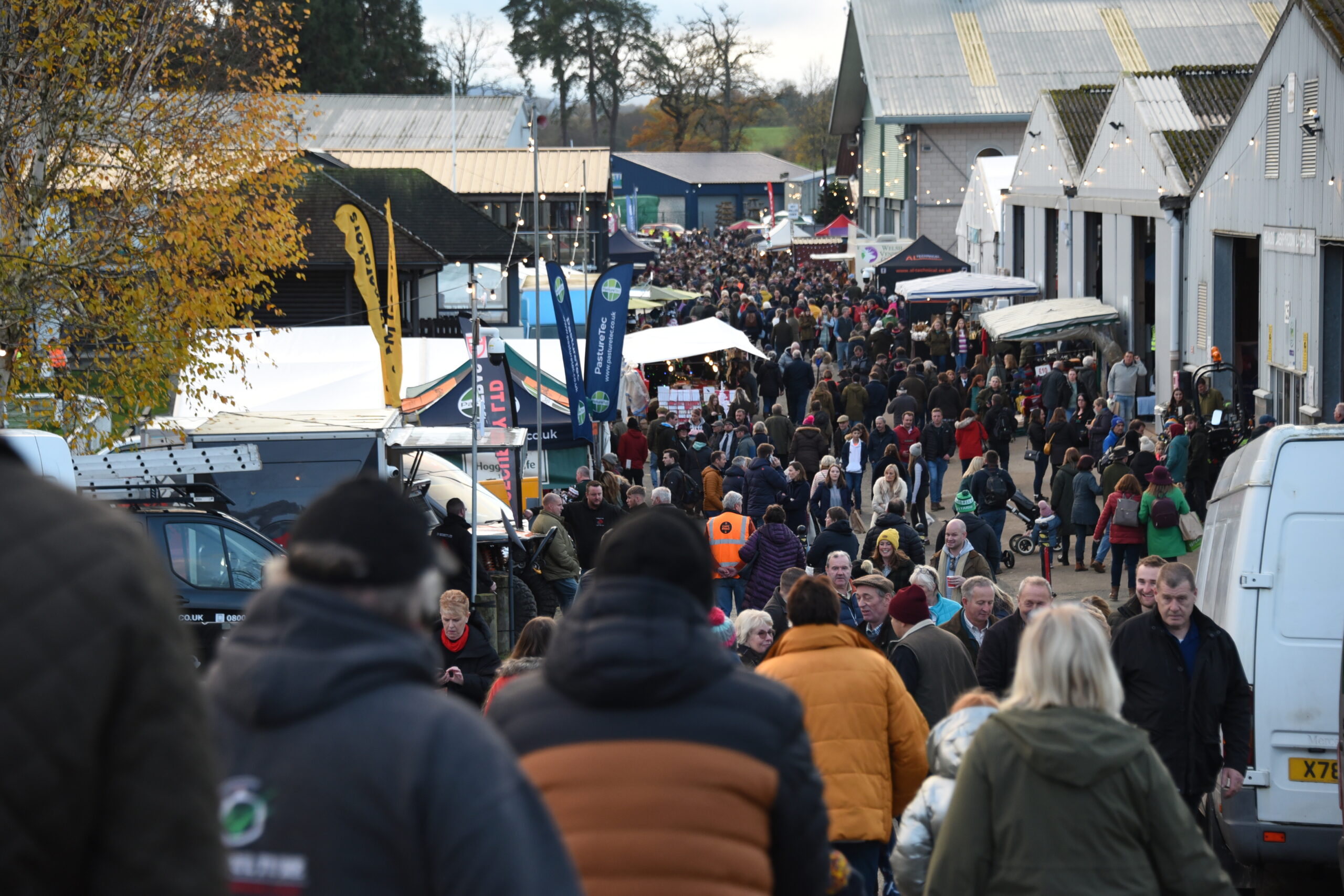 A fantastic and record-breaking few days have been enjoyed by thousands at the Royal Welsh Winter Fair, held at the showground in Llanelwedd, Builth Wells.

First staged in 1990 and originally just a modest one-day event, the Royal Welsh Winter Fair has become one of the most popular attractions in the British agricultural calendar. The annual event continues to maintain its position as one of the finest primestock shows in the UK, this year attracting over 700 exhibitors from Wales, England, Scotland, Northern Ireland and Holland.

The Winter Fair was officially opened by Mr Dafydd Wynne Finch on Monday morning on behalf of the feature county of Clwyd. Dafydd is a farmer and landowner from North Wales, whose practices maintain a focus on sustainable and regenerative farming. During his opening speech, Dafydd conveyed the importance of collaborative work within the agricultural industry. The 2022 Winter Fair was Aled Rhys Jones’ first event as the Chief Executive of the Royal Welsh Agricultural Society after beginning the role in September of this year.

“There was a real community feel at this year’s Winter Fair. Everyone I spoke to commented on the vibrant atmosphere, energy and excitement – all made possible by the support from our competitors, traders, sponsors, volunteers and visitors.” said Aled.

As my first event as Chief Executive, I would like to thank the whole team who plays a part in bringing the Winter Fair to life. It is not only a great showcase of Welsh food and farming, it is also a showcase of our unique Welsh spirit. Diolch yn fawr iawn i bawb”

Primarily a trade event, the Winter Fair provides a perfect opportunity to network with fellow farmers, producers, suppliers, and buyers, and has become the ideal hub to discuss and do business.

The two-day event is an important platform for policy discussion and debate with Ministers from both the Welsh and UK Governments in attendance, together with a representative from the German Embassy, putting the event on the international map. The Society is proud that the Winter Fair has once again been able to play a role in facilitating discussions between highly influential individuals and organisations, which affect the future of Welsh agriculture and the rural economy.

The support for the event from the industry, especially the livestock exhibitors, has been phenomenal. With strong entries from across the UK in all sections, and record entries in the sheep section, the livestock, as always, played centre stage to the busy two-day event.

One of the most prestigious titles to be won at the event each year, the Supreme Cattle Champion, was awarded to ‘Baby Guinness’, a Heifer sired by a Limousin weighing 596kg, exhibited by Edwards Brothers from Clwyd, North Wales. Later sold by our official auctioneers, McCartneys, for an impressive £8,600, ‘Baby Guinness’ was bought by Kathryn Jones, of Castell Howell Foods. Gwyn Edwards of Edwards Brothers said that winning the Supreme Cattle Champion means “everything” to them as a family. Gwyn has been part of the Winter Fair Committee for over thirty years, and was recognised for his contribution and commitment to the Society during the event. The title is a great victory, especially to happen within Clwyd’s feature county year.

“After all of the effort and dedication from Clwyd, it’s wonderful for us as a family to finish on a high.” Gwyn said.

It wasn’t just the Supreme Champion that got everyone talking at this year’s Winter Fair. The Reserve Champion, ‘Sassy Girl’ fetched a staggering £36,000 at the sale on Tuesday afternoon, making a new Winter Fair record. The pedigree Limousin Heifer was exhibited by Katrina Little and Allen Shortt, from Cumbria.

“We were disappointed after coming second yesterday, but today has definitely made up for it!” Katrina Little said after the sale. The pair are delighted that ‘Sassy Girl’ has lived up to her name. “It’s what she deserves.”

More record-breaking sales were seen in the pig section, where a pair of Welsh pigs, exhibited by HD & EM Roberts sold for an impressive £800/head.

Elsewhere on the showground, the winner of our Best Overall Tradestand Award went to Frank Sutton LTD. The stand, based in the South Glamorgan Hall, had a busy few days displaying products from John Deere, Cat and Yamaha and offering their expertise in agricultural machinery.

This year saw over 300 tradestands, and over 60 more stands in the Food Hall where guests were able to sample the superb produce from across Wales and the border counties. The late night shopping evening again saw thousands of visitors indulging in some Christmas shopping and enjoying the festive atmosphere and spectacular firework display.

Returning for the first time since the Coronavirus pandemic, Father Christmas kindly took time out of his busy schedule to meet the children at the Winter Fair in his Grotto. This year we also had two very special reindeer guests, Thor and Simba, join us! Back once again, Ye Olde Winter Fair Pub hosted many guests who were able to purchase Winter Fair branded reusable cups to help reduce the single-use plastic waste during the event.

As part of the Wales Football Tour, BBC Radio Cymru brought their giant inflatable bucket hat to the Winter Fair on Monday providing a great picture opportunity for visitors outside the YFC building.

The success of the event can be accredited not only to the hard working and determined committee, but also to the loyalty of the exhibitors, traders, volunteers, and stewards. Our events would not take place without the support of our sponsors, and we thank our headline sponsors, Welsh Government, HSBC and Dunbia, as well as all the sponsors, who have supported this event.

“As the 2022 Winter Fair draws to a close, we can once again be proud of what has been achieved. This year’s event has been sensational.” said Winter Fair Director, William Hanks.

“We are grateful for the huge amount of hard work and dedication from the many volunteers, stewards, traders, sponsors and, of course, the visitors who make this event possible. We hope all of our guests have enjoyed the Winter Fair and look forward to welcoming them back to our events next year.”

A summary of results:

Baby Beef Supreme Champion
Queen of Hearts, a Heifer weighing 397kg, bred and exhibited by James May, from Worcestershire. Sold for £5,500 to M Wynne from Matlock.

Carcass Supreme Champion Single
A Beltex X Beltex x, exhibited by B Blandford & Sons. Sold for £400 to P.Tucker from Swansea.

Carcass Supreme Champion Pair
A pair of Beltex, exhibited by N & L Standring. Sold for £400 to The Gower Butchers from Swansea.

Champion Hound In Show
Becca, from the Towy and Cothi Hunt. A Best Entered Bitch in the Welsh Hound Class.

A full list of results and winners will be available on the RWAS App and website shortly.