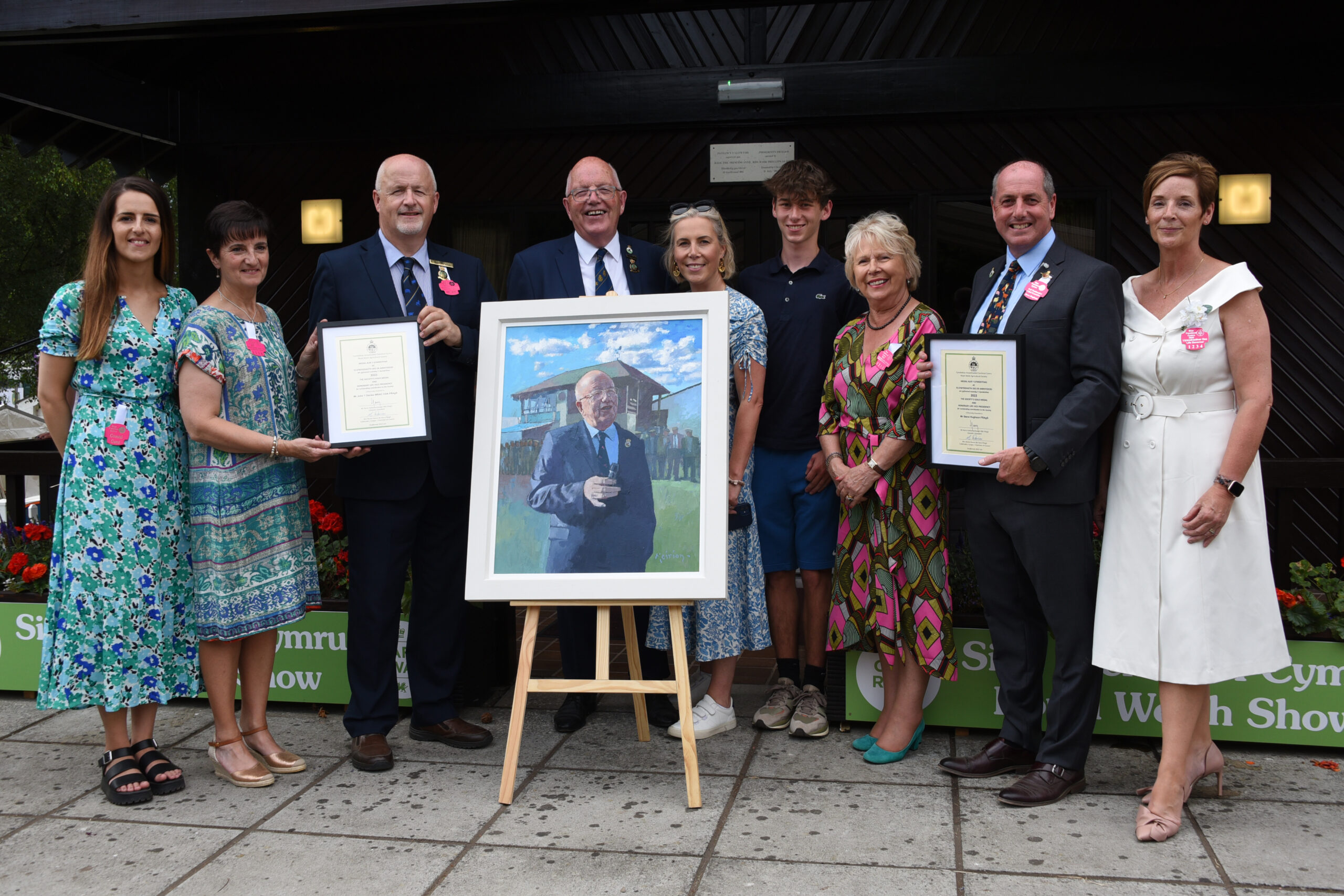 Each year the Royal Welsh Agricultural Society presents a series of honorary awards to people who have given exceptional service to the society, mainly in a voluntary capacity, and in many cases for well over 30 years.

A mix of honorary life vice-presidency, honorary life governorships and society awards were presented at a ceremony on the second day of the Royal Welsh Show (Tuesday 19th July) by Society President, Mr Harry Fetherstonhaugh OBE FRAgS. The Society was honoured to welcome HRH Princess Royal to the awards ceremony, where she presented several awards.

These awards are presented to individuals nominated by Directors and Assistant Honorary Directors, who have made an exceptional contribution to the Society over many years.

Mr David Lewis is the only individual to have attained the three highest positions within the Society as President, Chair of Board and Chair of Council.  A significant feat in itself and a testament to the high standing in which he is held by fellow members of this Society.  He has already received the Society’s Gold medal, but the Society wished to recognise his contribution further. David was presented with a portrait painting by Meirion Jones, a renowned artist.

Mr John T Davies, RWAS Chair of Board of Directors

Steve receives the Society’s Gold Medal and Honorary Life Vice Presidency for his outstanding service as Chief Executive.  Steve retires later this year after leading the Society through a period of change and modernisation that has put the Society in a strong position to face the future. His work ethic, tenacity and passion for this show is unquestionable and we recognise his huge contribution by way of a gold medal.

Philip is awarded Honorary Life Presidency for his outstanding service to the Society, for his duties at the summer show but also at our Winter Fair Event, where he is our Assistant Honorary Director for Administration.

Ruth is awarded Honorary Life Governorship for her outstanding service, especially to the County of Clwyd, where as Secretary she has supported the County through a Feature year that extended to three years due to the pandemic. She also contributed greatly to the Ambassador Committee of the show for many years and is also a Council member.

Gerald’s contribution and commitment to the Society included being an active member of several Committees, Livestock, Winter Fair and Programme Committees, and a County Advisory member.  He was hugely involved in the Fundraising during the Carmarthen Feature County year, and now steps down from stewarding, after 29 years, 20 of those years being one of the Chief Stewards in the Main Ring. Gerald is awarded Honorary Life Governorship for his outstanding contribution, and we thank him for his commitment to the Society over the years.

Colin has stewarded at the show for over 30 years and is the Chief Steward responsible for catering sections including members, judges, and stewards.  He is an active member of Carmarthenshire Advisory Committee and Society Council Member.  Colin is awarded Honorary Life Governorship for his outstanding service.

Lloyd Jones turned 90 on the first day of the Royal Welsh Show (Monday 18th July). During the awards ceremony, President Harry Fetherstonhaugh took the opportunity to wish him a Happy Birthday. Lloyd has been a loyal supporter of the Society and has attended the show every year since 1938.  Over the years he had shown cobs, commentated in the Main Ring and is the Welsh Agricultural Columnist for the Western Mail.  We thank Lloyd for the continued coverage and publicity that he provides about the Royal Welsh. Lloyd is awarded Honorary Life Governorship for his contribution to the Society.

Colin has been involved in the Lamb Carcass Competition at the Royal Welsh since 1963, helping his father the late Verney Pugh.  Colin became Senior Steward in 1991 and is also the Senior Steward for the Winter Fair Carcass Section. Colin is awarded with Honorary Life Governorship for this continued outstanding contribution to the Society.

Paul has been involved with the Poultry Section for over 30 years at the show and is the Chief Steward for the Winter Fair. Paul is awarded Honorary Life Membership for his continued outstanding contribution to the Society.

Rhian has worked for the Society for 24 years in various roles, including Reception, Personal Assistants and Festival Administration, and lastly as an Administration Officer overseeing the Stewarding and all three Society Events Administration.  Rhian is well known to everyone making long term friendships with staff, stewards and exhibitors, and will be missed by all. Rhian is awarded with Honorary Life Membership for her outstanding contribution and commitment to the Society.

It would be amiss of the Society not to mention a real stalwart of the Society who unfortunately couldn’t attend the ceremony due to health reasons. Sheila was the Honorary Secretary of Clwyd Advisory until 2014, she continues as a loyal member of the Clwyd County Advisory and Council Member. Sheila is awarded Honorary Life Governorship for her outstanding commitment and contribution.

Chair of Board John T Davies, former Chair of Council, David Lewis, and Chief Executive Steve Hughson were all awarded special awards and mementos for their outstanding service to the Society. Pictured with their families at the Awards Ceremony at the Royal Welsh Show.