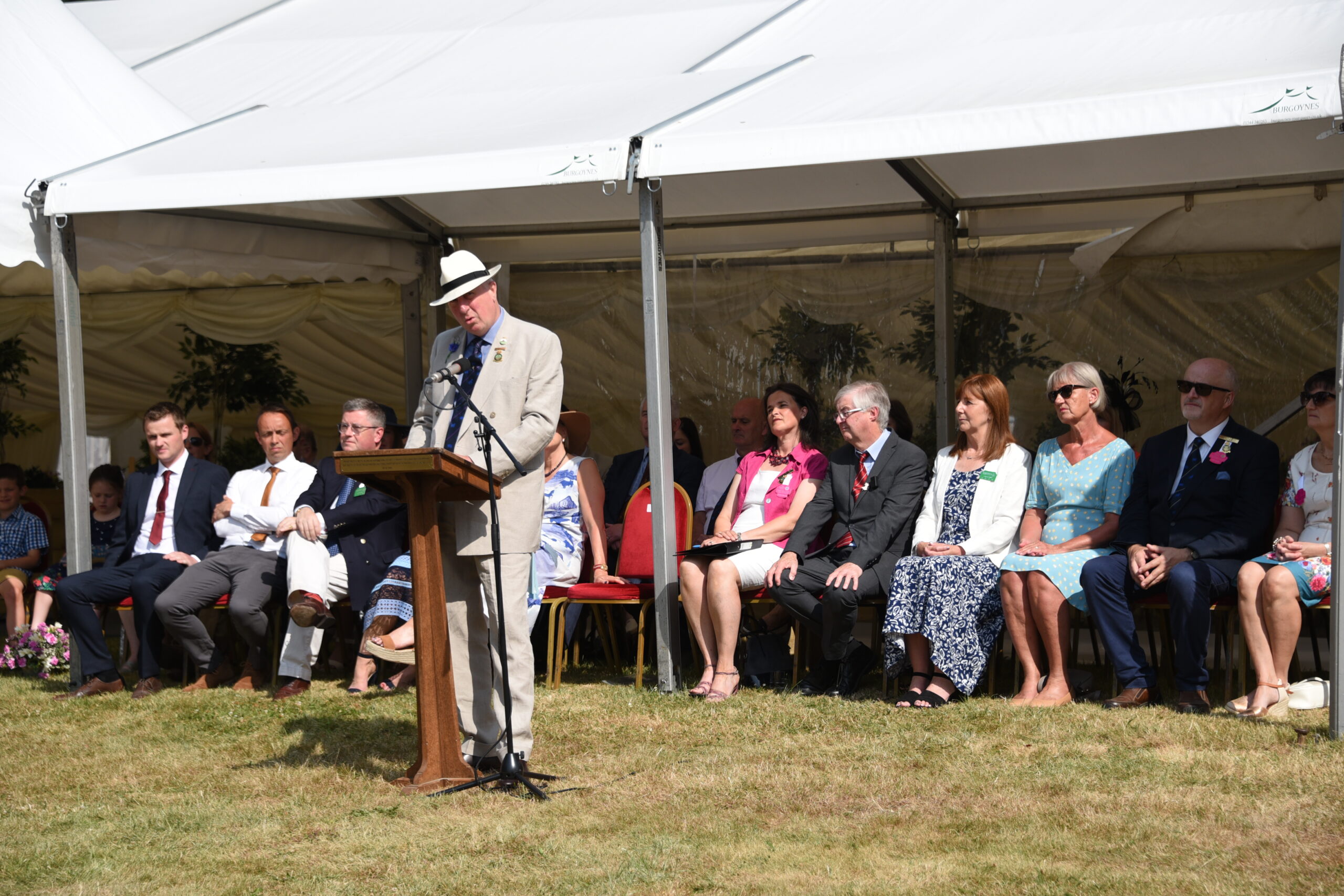 The opening day of the 2022 Royal Welsh Show welcomed warm weather and visitors back to the showground in Llanelwedd, Builth Wells. After a three-year break, this year’s Show is the first since 2019, and the atmosphere around the showground was buzzing with exhibitors, traders and visitors finally able to return to the pinnacle event of the agricultural calendar.

Addressing visitors at this morning’s opening ceremony (Monday 18 July), the 2022 President, Mr Harry Fetherstonhaugh OBE FRAgS said how proud he was to be the president of the Society during Clwyd’s Feature County year. “I stand here both humbled and honoured as being chosen by my peers to be President of this august and highly respected organisation. It has truly been a joy and a privilege to have made so many new friends through my 45 years of stewarding at the Royal Welsh.”

The show was officially opened by Mr Emyr Jones and Mr Rhys Williams, both of whom are part of a joint young entrants venture at Coed Coch, the home of President Harry Fetherstonhaugh. Both men conveyed their thanks to the Society and to Harry for the opportunity of co-opening the Royal Welsh Show.

“This wonderful show is close to my heart and I never once imagined that I would be in this honoured position, so thank you very much to the Royal Welsh Show and in particular to Harry for the privilege of addressing you today at the beginning of what’s going to be a fabulous week.” said Rhys.

Emyr and Rhys first met Harry six years ago when they were given the opportunity to join Harry and establish a joint venture at the home farm on the Coed Coch estate. Rhys spoke about how access to land is the biggest hurdle in preventing the next generation of farmers from running their own farming businesses and how joint ventures such as the one at Coed Coch can be part of the solution.

Rhys Williams has worked in agriculture throughout his life, starting in agricultural education before moving on to farm business consultancy work. He actively works on the family farm on the Llyn Peninsula as well as his involvement in the joint venture at Coed Coch where they endeavour to work towards sustainable farming methods.

Following the opening ceremony, the Royal Welsh Show kicked off with its impressive 12-hour programme of entertainment and displays in the Main Ring, including the spectacular Musical Drive performance from the King’s Troop Royal Horse Artillery, quad bike stuntman Paul Hannam, with his thrilling Quad Bike Stunt Show, the RAF Falcons Parachute Display Team, the Regimental Band of the Royal Welsh, Black Mountains Falconry, Tristar Carriage Driving, and Meirion Owen and his Sheepdogs.

New to this year, the RWAS was pleased to launch the Rural Leadership Programme. Aimed at inspiring future leaders in agriculture, the programme is an opportunity to develop leadership skills at such an important time for our sector. The programme will be an action-packed course of training, mentoring, support and guidance over three intense residential sessions. The fourteen candidates were announced during yesterday’s awards ceremony.

RWAS Chief Executive Steve Hughson said “Despite the challenges of the weather, the first day of the Royal Welsh was a huge success, with thousands enjoying the wide range of livestock, displays and tradestands on site.  As we look forward to day two, we are excited that Her Royal Highness The Princess Royal will visit and see the very best that Wales has to offer.  As the weather improves, we look forward to three more days and increasing attendance.”