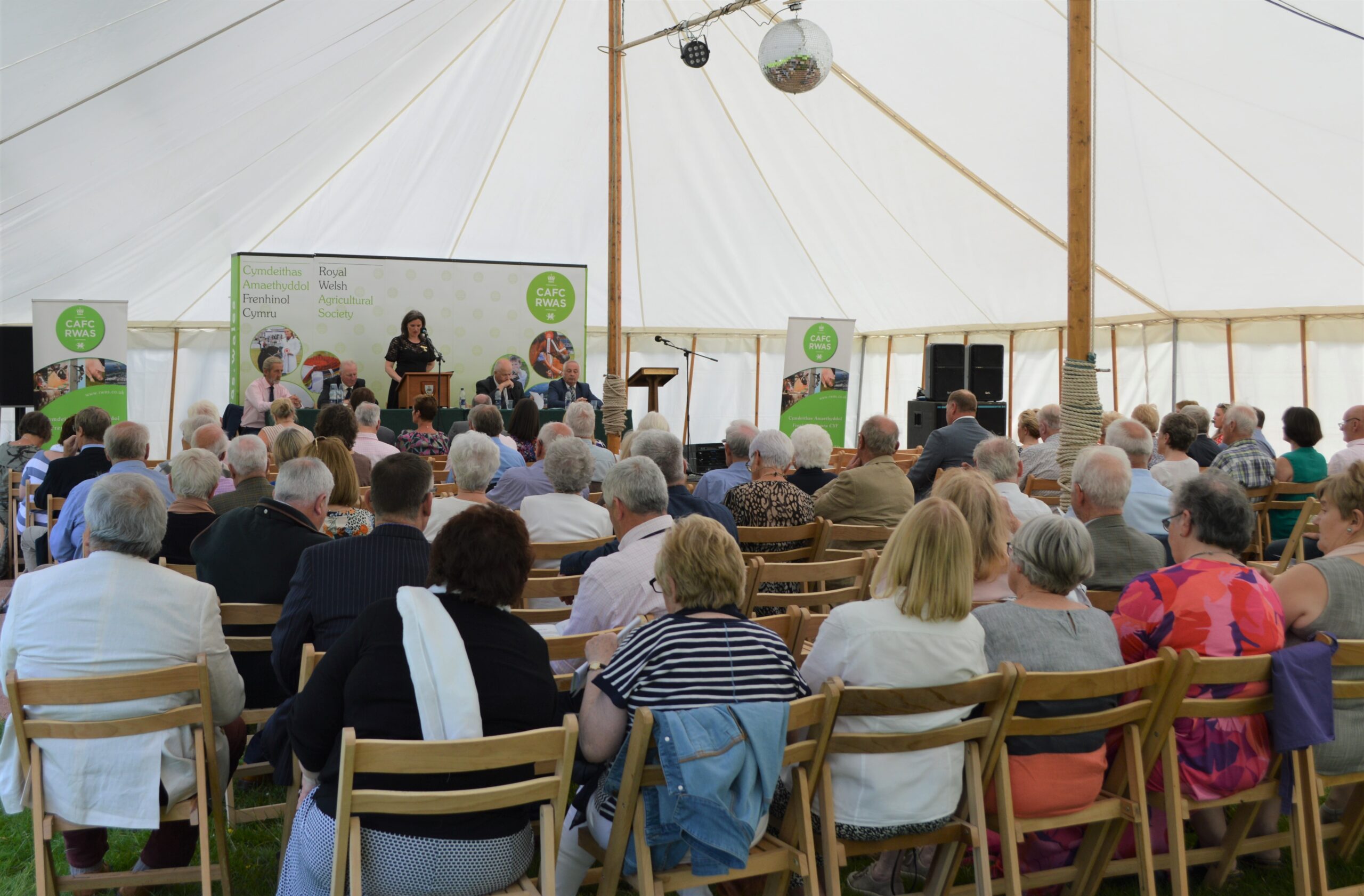 “Whilst the last two years have been the most challenging of all years, we now look with renewed enthusiasm at bringing normality back to the events and to the daily rhythm of the Society.”  said Mr John T Davies, Chair of the Board of Directors, in his address to members at the Annual General Meeting of the Royal Welsh Agricultural Society held on 16 June 2022.

Hosted by this year’s Feature County of Clwyd at Coed Coch, the beautiful home of this year’s President, Mr Harry Fetherstonhaugh OBE FRAgS, the 2022 AGM looked back on what has been a more optimistic year since the pandemic, and forward to this year’s Royal Welsh Show, only a few short weeks away.

Reflecting on the past year, Mr John T Davies said; “The year 2021 has allowed us the opportunity to embark upon transition towards the new normal in all aspects of our business post-pandemic. The first small steps in bringing people back to the hallowed turf of Llanelwedd came with the one off Equine Event in September, along with the AGM and Awards gathering in the same month.”

“The decision to run the Winter Fair in 2021 with continued Covid uncertainty was a close call, but nevertheless the correct decision. It allowed us to regain our confidence and capacity to run large events. My sincere congratulations go to the Winter Fair team for making sure the return of the Winter Fair was a resounding success.”

At the December Council meeting last year, the Society was fortunate to be able to meet face to face once again, renewing fellowship and friendship after a two-year lapse. It was also an important day for the Society, as Mr David Lewis, Chairman of Council, retired after a decade in the Society’s highest office.

“Dai’s contribution extends well beyond his retiring position within the Society, as he has held the three highest offices, as President and Chairman of Board as well. As we thank Mr David Lewis for his immeasurable contribution and dedication to the Society in so many different ways, I also wish to add my personal thanks for his steadfast support and invaluable friendship throughout my time as Chairman of Board.” Said Mr John T Davies.

The wind of change continues into 2022 as we welcome Mrs Nicola Davies to the elected position of Chair of Council, a historic moment within the Society as she is the first woman to take up the position.

“Nicola has proven over the decades that she holds the best interests of the Society firmly close to her heart. My sincere best wishes go to Nicola. She will be firmly supported by another passionate servant of the Society, Mr Alwyn Rees, as Vice Chair of Council. Congratulations to both of them on election to high office within the Society.”

In her opening address to members at the AGM, Mrs Nicola Davies said; “Balancing expectations with reality and maintaining the support of our membership and our customers is a challenge and something that we all will be part of from our staff, membership and committees to Council and Board. Our thanks go to all of these for their continued support.”

“However, my wish is that the Royal Welsh Agricultural Society will further embrace its role in promoting rural Wales, our heritage, our agricultural industry and our people, both young and old.

We are in a very privileged position in that we can be a conduit for change, challenging perceptions and encouraging conversations and in so doing reaching out not only to those that are aware of what we do but also those that are not.”

Moving onto the Feature County Clywd, Nicola commented; “This Society has faced turbulent times in the past and will again in the future but Clwyd as a feature County, under the leadership of our President, Ambassador Lowri and the committee by his side, has shown us the tenacity, the perseverance and the commitment that is needed to survive and thrive.”

Addressing the members, Mr Harry Fetherstonhaugh, the 2022 President, thanked his wife, Davina for her support, along with the wider Clwyd team for their hard work and support over the last two years. The Grassland event, held on 12th May at Llysfasi College, was a resounding success. Thanks go to the thousands who turned up and the companies who demonstrated, exhibited and sponsored the event.

Looking toward the future, John T Davies gave an outline of what is in store for the upcoming Royal Welsh Show, the first in three years due to the pandemic. (18 – 21 July 2022).

With livestock continuing to form the centrepiece of the show, he was pleased to report strong entries, ensuring everything is set for four days of fierce competitions showcasing the very best of British and Welsh agriculture.

The big attractions in the Main Ring this year will be the King’s Troop Royal Horse Artillery performing their Musical Drive, one of the most spectacular displays of horsemanship in the world, and daredevil quad bike stuntman Paul Hannam, with his thrilling Quad Bike Stunt Show. Not to be missed are the RAF Falcons, the UK’s premier military parachute display team, with their exciting free fall display at speeds up to 120mph.

Returning to entertain the crowds will be the impressive Regimental Band of the Royal Welsh, Black Mountains Falconry, Tristar Carriage Driving, and Meirion Owen and his Sheepdogs.

The Royal Welsh Show will take place at the showground in Llanelwedd on 18 – 21 July. For more information on the Society or the Show please visit www.rwas.wales