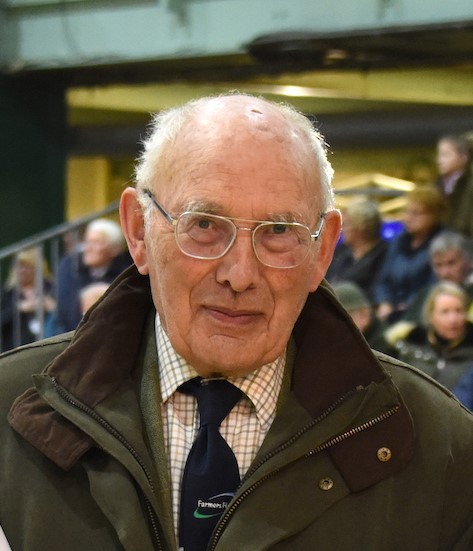 The John Gittins Memorial Award is awarded to a person born, working or living in Wales who in the judges’ opinion, has made an outstanding contribution to the Welsh Sheep Industry.  The Award was established in 2000 by the Welsh Mule Sheep Breeders Association in conjunction with the Royal Welsh Agricultural Society as a mark of respect for the founder of the Welsh Mules, Mr John Gittins of Ystum Colwyn, Meifod, Powys.

This year, one of the most prestigious prizes in Welsh agriculture, the John Gittins Memorial Award for outstanding contribution to the Welsh Sheep Industry, has been won by Mr Terry Bayliss.

Mr Bayliss was jointly nominated by the Farmers Union of Wales (FUW) and the National Sheep Association Cymru (NSA Wales), in recognition of his role in establishing the farming co-operative Farmers First, and its two operating abattoirs Farmers Fresh and Farmers Fresh Wales. The business, which is owned by 2,750 farmer shareholders is focused on working for farmers throughout the UK by developing export markets for UK lamb. The company, which now has an annual turnover in excess of £100 million and processes one million sheep per year equivalent to 10% of the UK’s lamb production has been instrumental in maintaining market prices, of benefit to many farmers in the UK.

The phenomenal success story began in 1998 when Terry, along with four others formed “Farmers Ferry” which aimed to export lambs direct from farms to the continent.  From an idea born out of poor returns for sheep farmers the company has grown and proved to be vital in maintaining market prices particularly of the smaller mountain lambs and in its second year exported 1.2 million lambs.  Terry has been directly involved in the company since its formation serving as Company Director and Chairman for 23 years.

The success of the Farmers Ferry rapidly led to the offering of shares in the company Farmers First and over 2,750 farmers bought a stake in the business.  In 2000, Farmers Fresh was formed as the abattoir arm of the business working from its slaughterhouse in Kenilworth, Warwickshire in order to export lamb carcasses.  The company established farmer-controlled access to the massive European lamb market, with the basic principle that finding demand for UK produce would bring competition into the UK market and push the price of lamb up.

Terry’s drive and ambition has been integral to the growth of the business, and through his leadership kept the initiative on its core objective of improving the returns to UK livestock producers.

Terry has persistently championed Welsh lamb and had a long-held ambition to process stock in Wales.  The business expanded further in January 2018 forming Farmers Fresh Wales by acquiring the Fairfield Meat Abattoir in Wrexham, which has the capacity to process 10,000 lambs weekly, and serving the 1,100 shareholders that farm in Wales.

Under Terry’s Chairmanship the business has met many challenges, in the early days when exports were stopped because of outbreaks of foot and mouth in the UK, real concerns over the Brexit deal and now the current Covid pandemic.  These challenges have been overcome by the company working hard to maintain trade with 12 countries within the European Union and further develop new business by supplying the UK domestic market and Countries outside the EU, including Canada and the Middle East.

The company remains focused on its core principles, realising the greatest value the company can bring to the sheep farmer is being there to buy a range of stock at livestock markets and direct from farm.  The company is the leading farmer owned abattoir supplying lamb carcasses and mutton to European and UK wholesale customers.  Having developed from humble beginnings to a major player in the UK processing sector, the judges agreed this to be an outstanding contribution to the Welsh Sheep Industry.

Mr Alwyn Rees, representing the Royal Welsh Agricultural Society, Mr Kevin Parry, from the Welsh Mule Sheep Breeders Association and Ms Kate Hovers, from the National Sheep Association Wales made up the panel of judges for the Award.

The judges stated that the quality of candidates this year was, once again, outstanding.  However, interviewing a shortlist of three candidates the judges were most impressed with the achievements of all the shortlisted candidates, but after careful consideration they finally agreed that the John Gittins Memorial Award should be awarded to Mr Terry Bayliss in recognition of his lifetime contribution to the Welsh Sheep Industry.

As the winner, Mr Bayliss will be awarded with an item of Welsh Crystal, kindly sponsored by the Welsh Mule Sheep Breeders Association.