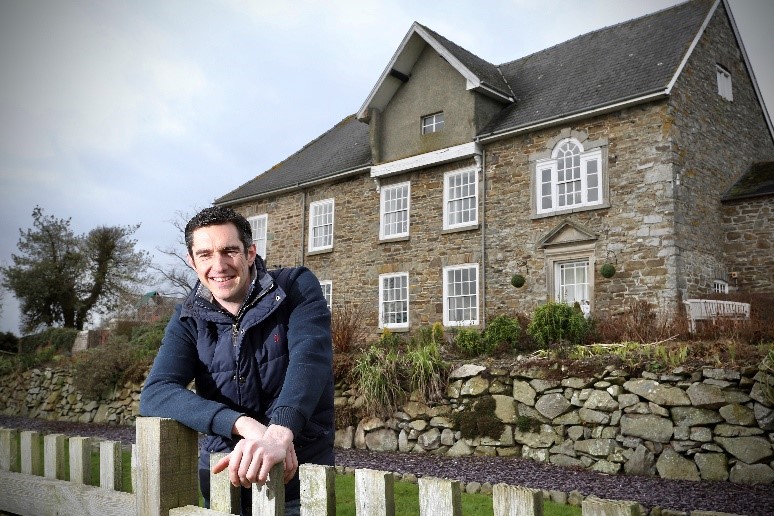 The 2021 All Wales Grassland Management Competition run by the Federation of Welsh Grassland Societies in conjunction with the Royal Welsh Agricultural Society and kindly sponsored by HSBC is a very strongly contested competition; and despite recent circumstances, this year was no exception.

The other two finalists in the competition were:

350 autumn born Aberdeen Angus x heifer calves are purchased annually at 3 weeks of age, reared on high quality grass silage during the second half of the winter, turned out to grass in spring and finished off grass in the following summer at 20-24 months of age with carcass weights of 300kg after being out-wintered on fodder beet and baled grass silage.  The April lambing sheep flock is also out-wintered on fodder beet with 1.45 lambs reared per ewe to a target carcass weight of 19.5kg off grass.

22.5 hectares (60 acres) of fodder beet are grown and grazed by out-wintered yearling cattle and sheep. Approximately 16 ha (40 acres) of largely short-term leys are harvested and clamped as high quality silage for the housed, weaned calves with an additional 40 ha (100 acres) of long term leys producing approximately 650 bales of silage to be fed to cattle with the grazed fodder beet. To cope with the impact of dry summers, emphasis is now being placed on herbal leys containing cocksfoot, clover, chicory and plantain with an area of a plantain, chicory, red and red clover mixture being grazed with the young cattle for the first time this year. The farm is involved in the GrassCheck project and grass is measured weekly. Annual yields have ranged from 12.5 tonnes DM/ha in 2019 to 6.5 tonnes DM/ha in the drought year of 2018. As a result, the response has been to question the ‘norm’ and to build up higher covers than previously during the grazing season as an insurance against the dry periods that are now an inevitable part of most years.

“With Trefnant Hall, the overall livestock output is a highly impressive tonne of liveweight per hectare. By adopting the system, and as a result of the efficient production and utilisation of forage, the farm has slashed costs whilst achieving enviable physical and financial output. Concentrates have, in effect, been eliminated from the sheep flock as well as beyond the calf rearing phase for the cattle, leading to a truly grass and forage based farming system.

The farm has also recorded an estimated Carbon footprint of 7.92kg CO₂ per kg of lamb and 10.37kg per kg of beef in a recent evaluation conducted by HCC compared with national average values of 10.08kg and 14.05kg for lamb and beef respectively.

Particularly noteworthy were efficient nutrient management, the adoption of novel forage species and grass seeds mixtures to cope with the susceptibility of the farm to drought, the effective use of rotational grazing, regular plate meter measurement of grass and the production of high quality silage as well as the reliance on fodder cropping which enabled the successful out wintering of livestock. Added to these were a highly commendable flexibility and adaptability in both outlook and practice, an encyclopaedic knowledge of the physical and financial aspects of the business, hitting premium markets and securing contracts to safeguard prices and the highly efficient use of labour.”

This year’s cold and dry spring followed by a wet May had created some problems associated with a lack of early spring grazing and also challenging first cut harvests for the two dairy farms in particular. The subsequent rather warmer but unsettled weather throughout the weeks leading to the late June judging meant that grassland and forage crops alike were looking really well and all entrants are to be highly commended for the appearance of the grassland and livestock as well as the farms in general.

A common theme, in addition to grassland management excellence, was the awareness of the potential impact of pending NVZ designations and sound environmental management credentials.  This was the case with Bowett Farm, this year’s Runner-up, according to the judges:

“Bowett Farm, in addition to the highly impressive management of both grazing and the 3 cut silage system, regular reseeding with high sugar grasses and the recent adoption of injected liquid nitrogen fertiliser are evident as well as the farm’s well designed and impeccably maintained infrastructure. Excellent renewable energy credentials resulting in self-sufficiency in electricity from wind and solar sources and highly efficient use of labour as well as the priority given to working conditions are all key features of Richard’s approach.”

“Treveddw Farm have successfully adopted to the type of precise rotational grazing system normally associated primarily with dairy cows, the effective use of deferred grazing and a well thought out over-wintering system for each category of stock as well as the adoption of multi-species swards were highly notable aspects. Finishing cattle on grazed grass, a completely concentrate-free system and the overall resilience of the farming system were also outstanding features at Treveddw as well as Mark’s undoubted passion for his farm and farming system.”

“Glaspant Milk yields average are over 7,400l per cow with 3,620 litres from forage and 14,292l / ha coming from the grazing platform and silage ground. The youngstock also produce a highly respectable 822kg liveweight/ha. Particularly noticeable was the high quality silage made, overall silage clamp management (especially the open clamp which was being fed in summer with very little or no apparent waste), the extremely impressive use being made of slurry and manure, effective use of contractors and their own labour, the care and maintenance of harvesting machinery that was far from new but looked impeccable and the overall appearance of the farm, yard and buildings – a truly outstanding feature.”

Our competition judges this year, for whom we are truly thankful for their support, were:

“After the disappointment of the Covid-enforced cancellation of the 2020 competition, the judging panel were privileged to visit four excellent grassland farmers and we are grateful to the finalists for their hospitality and the excellent tours of their farms.”

Our All-Wales Grassland Management Competition winner, Marc Jones will be presented with The Federation Perpetual Trophy as well as £250; whilst Richard Morris will receive £150 as the runner-up.  Our gratitude is also expressed to our sponsors and all entrants in the final and regional rounds, who together have ensured a worthwhile outcome.   We wish Marc Jones and family all the best as he moves ahead to enter the British Grassland Society’s ‘Grassland Farmer of the Year Competition 2021’.

The Royal Welsh Agricultural Society are delighted that this year’s competition could be adjudicated during the Covid 19 pandemic and would like to take this opportunity to congratulate and thank everyone who participated in the competition, including the judges, the sponsor HSBC and the Federation of Welsh Grassland Societies for their continued commitment and support in running such an outstanding competition.