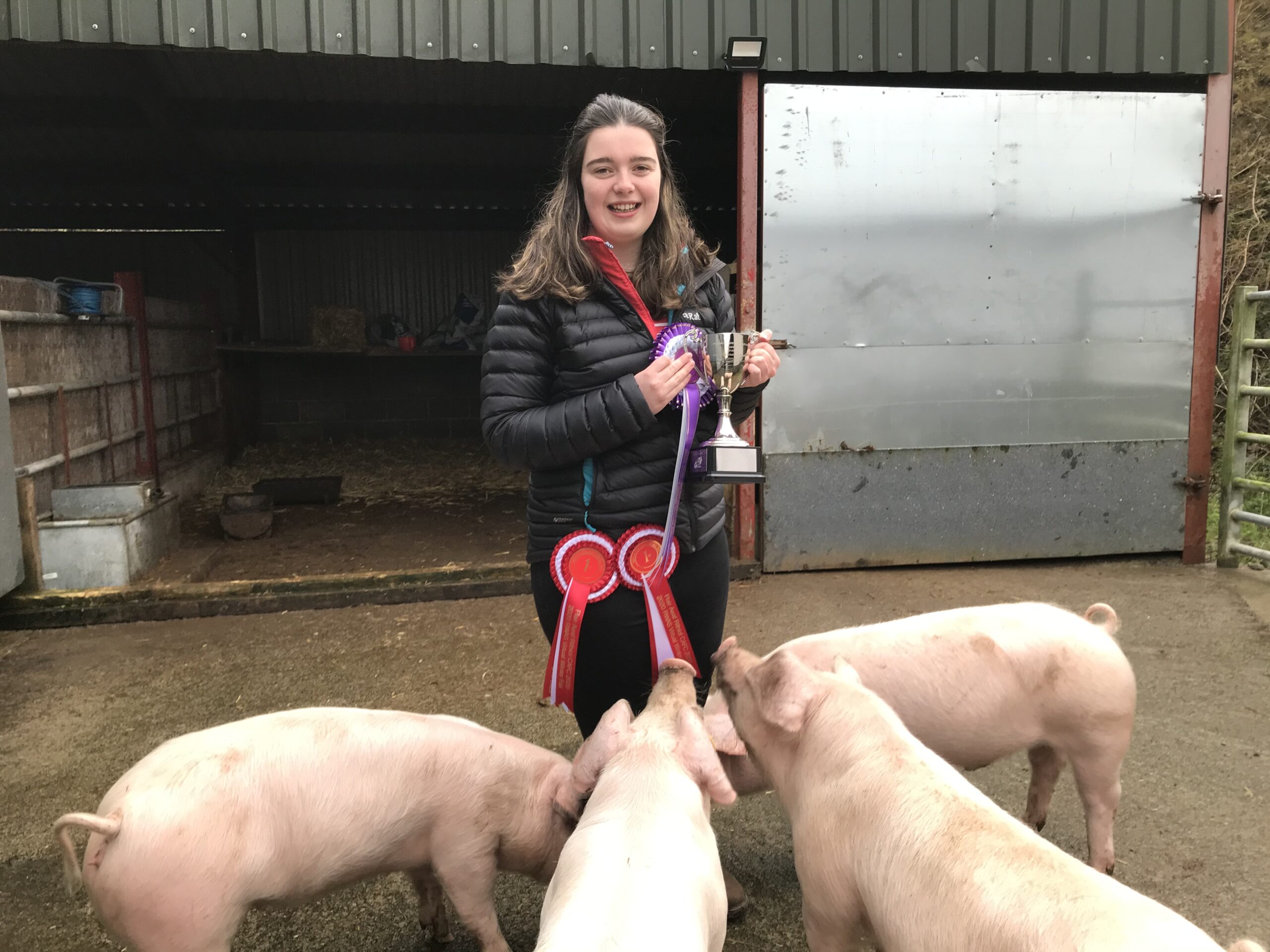 Teleri, who is a member of Pontsian YFC, took the title in a keenly contested competition,
with the result announced as part of the Virtual Winter Fair (November 30th & December
1st).

The competition is an annual joint venture between Wales YFC and Menter Moch Cymru
and aims to encourage the next generation of pig keepers and to get farmers thinking
about pigs as a viable diversification option.

In early September, each finalist was given five, eight-week-old Welsh weaners to rear.
These were weighed every fortnight to record their growth rate and their feed intake was
also recorded. The finalists entered into a bespoke training programme to help them with
their venture.

Designed and delivered by Menter Moch Cymru, the training programme included pig
husbandry and welfare, legislation and feed/nutrition, with additional training sessions and
monthly zoom meetings on topics such as marketing. The training sessions also featured
experienced pig keepers passing on first-hand the knowledge that they have acquired
over the years.

The climax of the competition saw the six young farmers battle it out for best finished pig,
pairs and overall winner of the competition during the Virtual Winter Fair, with the virtual
classes judged by experienced show winning breeder, Ela Roberts from Pwllheli.
Menter Moch Cymru & Wales YFC Pig Finishing Initiative 2020 winner, Teleri Evans, said
she was “over the moon” with her win, and would encourage “anyone to take part in the
initiative next year.”

She said, “I’ve enjoyed the experience so much. I’m extremely grateful to Menter Moch
Cymru for providing the pigs, and for the support I received from them. I could just pick up
the phone, and they were always there to help. I’d also like to thank my partner, Carwyn,
for all his help. If anyone has any doubts, thinking that they wouldn’t be able to do this, just
go for it. I’ve enjoyed the experience so much.”

Teleri’s plans include selling the pork from their winning pigs, as well as building a future
in the pig industry.

Said Teleri, who lives near Llandysul, “As keeping pigs has fitted in so well into our life
here, we’ve decided to expand and buy more pigs.”

“Many congratulations to Teleri, and to all this year’s finalists – who have worked so hard
throughout the competition,” said Melanie Cargill, Menter Moch Cymru Project Manager.

“Covid-19 restrictions meant we had to make some adaptations to the usual Menter Moch
Cymru & Wales YFC Pig Finishing Initiative programme. However, there was no shortage
of dedication and enthusiasm from the finalists, who I am sure have a great future ahead
as pig producers.”

Wales YFC’s Clare James, Rural Affairs Chairman said, “We’d like to congratulate all the
finalists, and especially Teleri, on a fantastic achievement in an exceptional year. And we
look forward working with Menter Moch Cymru again next year to promote pig keeping as
a future enterprise to our members.”

Mared Jones, Head of Operations at the Royal Welsh Agricultural Society, said, “The
Menter Moch Cymru & Wales YFC Pig Finishing Initiative final is an important part of the
virtual package we put together for this year’s Winter Fair, and we congratulate Teleri, all of the
finalists, and all those involved in making the event possible.”