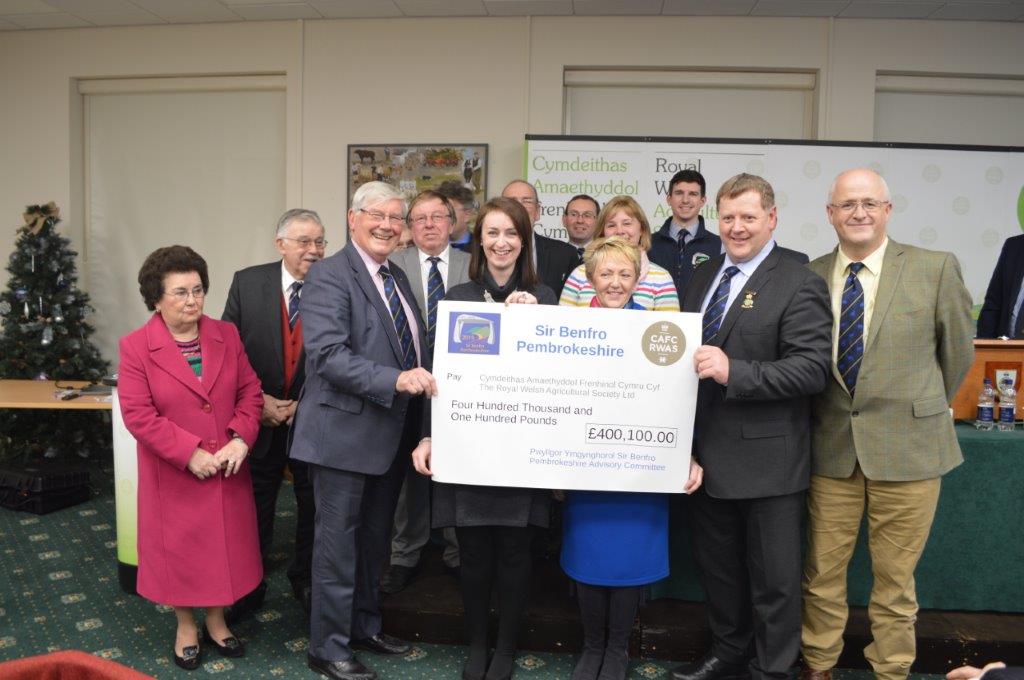 Pembrokeshire’s incredible feature county year has come to a close as their term-of-office ended at the society’s annual council meeting, held this year at the showground on Friday 6 December.

Ably led by President, Seimon Thomas, the 2019 Feature County began their journey over two years ago. “It’s been one hell of a journey, but a wonderful journey!” said Seimon in his final address as president to the society’s council members. “Not only have we had numerous successful fundraising events, we have also bought friends together and had the opportunity to make new friends – who will always be friends for life. It has been joyful to work with so many wonderful people and my thanks goes to everyone involved.”

“By working together we have done ourselves proud by not only raising a staggering £400,100 for the Royal Welsh Agricultural Society, but we have also raised an additional £26,000 for local charities and organisations such as Prostate Cymru, Wales Air Ambulance, DPJ Foundation, Tir Dewi, RABI, First Responders Crymych, the Urdd, Pembrokeshire County Show, and others.” announced Seimon.

David Lewis, Chair of Council for the Royal Welsh Agricultural Society, expressed his gratitude to the Pembrokeshire team; “We extend out huge appreciation to Pembrokeshire and our President, Mr Seimon Thomas, his wife Eleanor and the whole Drysgolgoch family. They have been amazing.

“The selection of president is one of the most important decisions each feature county makes, and it is clear that Seimon was the right choice. The way in which he and the committee have united the county on both sides of the Lansker Line is commendable and will leave a positive legacy of the society in Pembrokeshire for years to come.

“Every leader needs a good team and in addition to the family, Seimon has been tremendously supported by the chair, Meurig James, secretary, Geraint James and treasurer, Roger Howells. We thank them all.”

Receiving a vote of thanks from Roger Howells, Emily Rees was also praised for all the hard work enthusiasm and energy she brought to the roll of Lady Ambassador.

“I was determined to not only celebrate success, but to also deliver the society’s objective to encourage and promote agricultural science, research and education in particular in relation to food, farming and the countryside” explained Emily.

“Through embarking on the hugely ambitious project of the Cows On Tour roadshow, we have been able to successfully share our farming story with thousands of school children and communities across Wales. By working together with other organisations and charities, we have been able to more than double our efforts. It is now up to all of us, the society and the industry to play a role in continuing to deliver this objective and educate the next generation.”

Following in the footsteps of the 2019 Feature County of Pembrokeshire, it is now the turn of Clwyd to take up the mantle for forthcoming year of 2020.