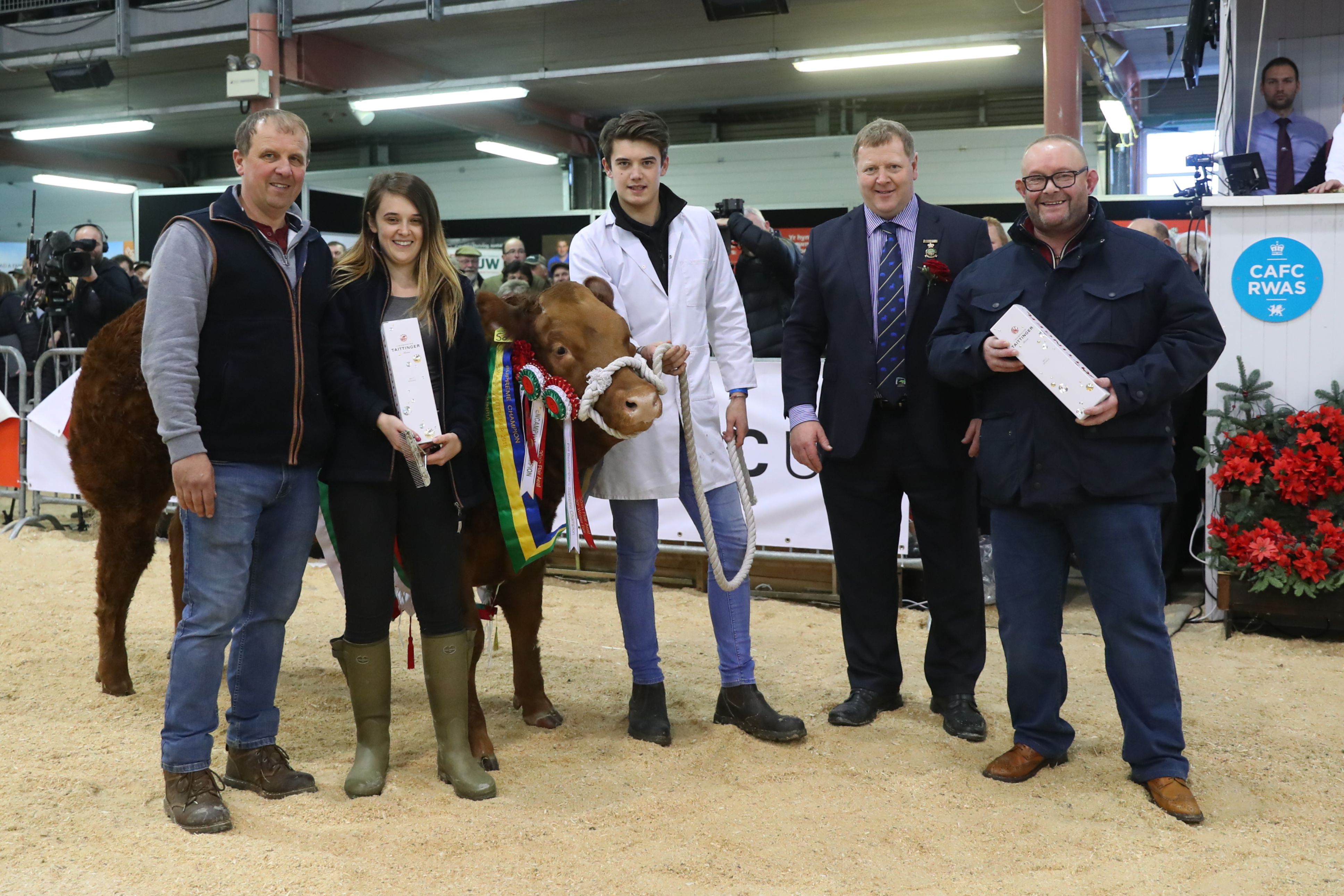 Celebrating its 30th year, the Royal Welsh Winter Fair proves to have stood the test of time with another hugely successful two days.

At such a milestone anniversary, we are not only delighted to look forward to a prosperous future, but also look back and pay tribute to the past thirty years.

First staged in 1990 and originally just a modest one-day event, the Royal Welsh Winter Fair is now widely referred to as the finest prime stock show in Europe and has become well established as one of the most popular attractions on the British agricultural show calendar. The success of the event can be accredited to not only the hard working and determined committee, but also to the loyalty of the exhibitors.

Once such exhibitor is Mr David Phillips, a beef and sheep farmer from Windsor Farm, Lamphey, Pembroke, who officially opened the event on Monday morning.

“My involvement with the Royal Welsh Winter Fair began 30 years ago when, together with my late father-in-law Idris James, and my wife, Ruth, I exhibited at the very first event.” Mr Phillips explained during his speak at the opening ceremony. “Today, my son Andrew, daughter-in-law Jane and my Grandson, Eddie, are exhibiting in the cattle section… that’s four generations from just our family supporting this great prime stoke show.”

“I congratulate the society on its foresight in introducing this event back in 1990, which has since gone from strength to strength and continues to play a leading role in the development of agriculture. It now draws people from all over the United Kingdom to exhibit livestock and produce, showing the fantastic things British agriculture has to offer.”

David Lewis, chair of the society’s council explained that agriculture, of course, continues to form the heart of our events. “Our Winter Fair is a showcase of the best prime stock in the UK and we could not put on the event without our exhibitors, buyers and of course our auctioneers – we must do all we can to support the red meat sector at this uncertain time.

“One of the pillars of our success is the unwavering support of our exhibitors. We are delighted, despite challenges to have increased cattle entries, increased entries in the carcass hall strong entries in the poultry show, sheep, horses, pig, home craft and poultry sections and more floral art and Meat Hampers this year, the event is going from strength to strength.”

Thanking the exhibitors for their tremendous support for the past 30 years, each one was presented with a commemorative 30th Winter Fair bauble, three of which contain a secret golden ticket to win a pair of tickets to one of the society’s events in 2020!

Primarily a trade event, the Winter Fair provides a perfect opportunity to network with fellow farmers, producers, suppliers and buyers, and has become the ideal hub to discuss and do business. Once again the profile and importance of the event was demonstrated with a visit from Prime Minister, Boris Johnson.

As an event full of business and industry leaders, the Winter Fair is fast becoming the perfect place for stakeholders to come together. The society is pleased that the Winter Fair has been able to play a role in facilitating discussions between some very influential individuals and organisations, which affect the future of Welsh agriculture and the rural economy.

One of the most prestigious titles to be won at the event each year, the supreme cattle champion, was awarded to ‘Rizzo’, a Limousin X British Blue heifer weighing 672kg, exhibited by Wilkinson & Marwood from Layburn, North Yorkshire. Later sold by our official auctioneers, McCartneys, for an impressive £10,800, ‘Rizzo’ was bought by Mr Webster of R.G.B Webster & Sons Ltd, Rhyl. ‘Rizzo’ was just one of 24 animals that Mr Webster bought during the fair, spending in excess of £47K on the incredible exhibits up for sale on the Tuesday afternoon auctions.

Elsewhere on the showground, the winner of our best overall tradestand award went to Hybu Cig Cymru / Meat Promotion Wales. The stand, in the heart of the South Glamorgan Hall, had a busy few days with various launches, news events, cookery demonstrations with top-chefs and even a seasonal world record attempt by pork producers to prepare as many pigs in blankets as they could, against the clock.

This year saw over 400 tradestands including a new overflow area for the food hall, the Winter Fair Food Court, which contained 20 extra stands and over 10 additional outside stands in new space that we have had to find to accommodate the exceptional demand for this popular event. The late night shopping evening again saw thousands of visitors indulging in some Christmas shopping and enjoying the festive atmosphere and spectacular firework display.

“As the 30th Winter Fair comes to an end we can once again be proud of what has been achieved. We are indebted to the huge amount of hard work and dedication from the many volunteers, stewards, traders, sponsors and, of course, the visitors.” says Winter Fair Director, William Hanks.

“It is as a result of the commitment from these loyal Winter Fair supporters that the event has surpassed all expectations of our forefathers when they began planning this event back in the late 1980s. It is safe to say that they would be extremely proud of what an excellent celebration of Welsh agriculture today’s Winter Fair has become.”