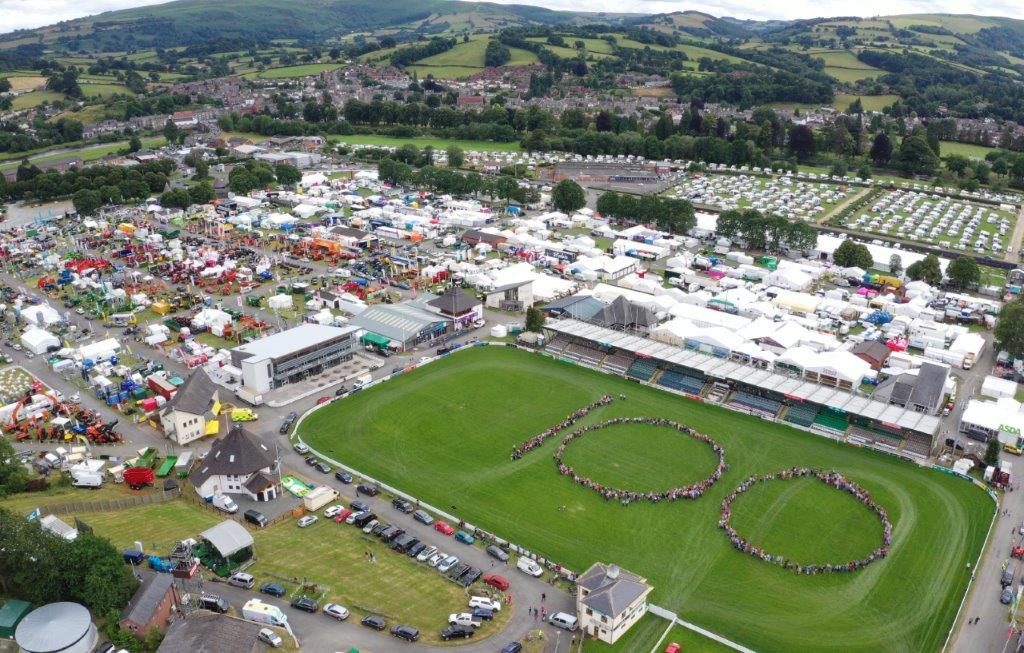 As our 100th Royal Welsh Show draws to a close, it is safe to say that the last few days have been packed full of sunshine and celebrations.

Since the very first show held in Aberystwyth in 1904, the show has evolved throughout the years to become one of the best and biggest agricultural shows in Europe, celebrating the very best of Welsh and British agriculture and produce.

With the early aims of the society to improve the breeding of stock and encourage agriculture throughout Wales, the first show attracted 442 livestock entries. These initial objectives still ring true today, with livestock taking centre stage at the show. This year livestock entries numbered over 8,000, with exhibitors converging on the showground in Mid Wales from across the UK and further afield, all hoping to go home with a coveted Royal Welsh rosette.

Rounding off a fantastic few days of hotly contested competitions, an awe-inspiring Supreme Champion of Champions competition was staged in the main ring on the Thursday afternoon. Kindly sponsored by Tesco, also celebrating their 100th anniversary, this special class saw horses, cattle, sheep, goats and pigs all competing for this one-off 100th Royal Welsh Show title. The honour of judging fell to our very own Show Director, Harry Fetherstonhaugh, in his final year in the role after 25 years.

Watched by thousands of visitors and all the stewards and honorary directors, Harry declared the winner of this one-time title as Offham Theresa 32nd, the Welsh Pig gilt Pig Supreme Champion, bred and exhibited by Wakeham-Dawson and Harmer from Lewes, East Sussex.

“I am delighted to name this beautiful specimen the title of Champion of Champions here at our 100th Royal Welsh Show” said Harry. “It was a very difficult decision, but I have to say, I think she is a real picture and a very deserving winner.”

The overjoyed owners were presented with a unique crystal Champagne bucket and matching flutes to commemorate this momentous occasion.

Judged by Mr B Champion

Throughout the four days there where a number of commemorative celebrations to mark the 100th show milestone in the show’s history. These included hosting a wedding for one lucky couple.

The loved-up pair were nominated by friends to tie the knot during the show, in an all-expenses paid wedding, following a number of difficult years for the couple and their family. After a morning of washing horses and preening poultry ready for their competitions the following day, Bethan and Arwel tied the knot in the heart of the show. Surrounded by an intimate group of friends and family (and thousands of happy well-wishers) the couple exchanged vows in our picturesque bandstand, before enjoying a glass of chilled champagne and delicious wedding breakfast with their guests, showcasing the opportunity for others to get married on the showground.

On each of the four days, the main ring was transformed into a musical extravaganza celebrating 100 years of farming and Welsh culture. Complete with both traditional and contemporary music, song, dance and commentary, a procession of some of the earliest farming machinery to the most up-to-date technology available today was cleverly choreographed into a breath-taking display for all to enjoy. Produced by the Welsh Pony and Cob Society Young Ambassador, Euros Llyr Morgan, the spectacle featured Wales’ finest, Shân Cothi wowing the crowds whilst on horseback and X Factor finalist, Lloyd Macey.

The 100th show was also picked up in many of the competitions throughout the showground with special commemorative prize cards and rosettes for the champions of each section, also with cake decorating, ornamental ironwork, forestry demonstrations and floral art classes depicting the theme. Staying within the horticulture section, the show hosted the launch of a brand new Sweet Pea variety to commemorate the 100th Royal Welsh Show, named ‘Gwawr Cymru’.

The beautiful Welsh sunshine graced us with its presence all week sending sales of ice creams and sunhats soaring. And making the most of the glorious weather, visitors were thankful for the recently installed water refill points dotted around the showground. Not only did this serve to keep everyone hydrated in the sizzling heat, it also helps the society and the show reduce the amount of plastic used onsite, which goes towards our commitment to making a positive contribution to the climate change agenda.

Apart from the competitions, amazing shopping and the 12hrs of non-stop action and attractions each day, the show plays hosts to a large number of visiting dignitaries. This year we were delighted to welcome The Prince of Wales and The Duchess of Cornwall to the show. During their visit, Their Royal Highnesses opened a new equine arena, unveiled a full sized sculpture of a Section D Welsh Cob Stallion and officially opened a new garden on the showground, created specifically to commemorate the 50th anniversary of HRH’s investiture as The Prince of Wales. There was also an opportunity for them both to meet with exhibitors, stewards, traders key agricultural leaders and showgoers and even present a number of prizes in the judging rings.

The royal couple were also joined by other royal visitors to the show, King Goodwill Zwelithini kaBhekuzulu and Queen Pumi, head of the Zulu nation. By meeting with members of the agricultural industry, King Goodwill intends to take back to his nation many examples of good practice to further improve their farming skills. Sharing good practice goes back to the reason agricultural societies were originally set up.

The Royal Welsh Agricultural Society has always paid homage to its steeped history and strong traditions, but we have never been afraid to move with the times and adopted new technologies and ways of working. While we look back on the first 100 Royal Welsh Shows with pride, we can also be proud that we are making plans for the future.

“The showground, here in rural mid-wales, is fast becoming one of the best connected rural event sites in Wales” says Steve Hughson, Chief Executive of the Royal Welsh Agricultural Society (RWAS). “We are delighted that the permanent phone mast here on site has been upgraded to 5G as a result of a collaborative project between ourselves, Welsh Government and BT, and that we will also have a new Vodafone / O2 5G mast on site before the Winter Fair.

“Following the installation of Superfast Cymru in 2014, and the 4G mast in 2016, this newest development is part of our strategy to move with the times, stay up to date with the ever-changing world of technology and ensure we remain relevant for the next 100 shows.”

Following the theme of innovation and future development, during the show a gold medal for the device most likely to be beneficial to Welsh farming, was awarded to Solar Pump Solutions Ltd, for their Solarflo Water System, allowing water to be pumped from any remote location without needing access to electricity. A Royal Welsh award of merit for new innovation that shows the most potential for improving agriculture in Wales was awarded to the JCB 19C-1 E-TEC mini excavator – the first of the electric generation and the industry’s first fully electric mini excavator with zero emissions, low noise levels and no compromise on performance.

“Delivering a successful show year on year is not easy, but once again the RWAS team have delivered for Wales” says the society’s Chair of the Board of Directors, John T Davies. “My thanks to all for making it happen in such a successful way.”

“As a Pembrokeshire man I am so proud of my native county and its contribution to the 100th Show, the county did its bit and excelled in making it the show of the Century. Sioe y ganrif!!!”