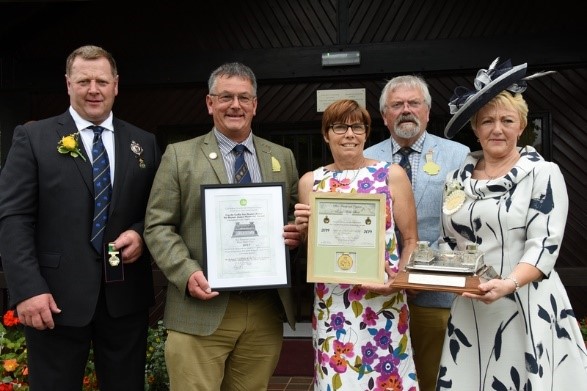 The winner of this year’s award has been kept under wraps until yesterday, (Monday 22 July), the first day of the Royal Welsh Show, creating a sense of excitement and anticipation that befits such a prestigious award.

Since 1957 the award has been made annually to someone from a different area of the farming industry who has reached the highest level of achievement in the chosen sector. This year the judges were looking an individual who has created a viable agricultural business through an initial tenancy, farm business tenancy (FBT), share farming or joint equity agreement.

With all four shortlisted finalists, and their families eagerly awaiting to hear who had won, the society’s Chair of Council, Mr David Lewis announced that the winner of the 2019 Sir Bryner Jones Memorial Award is Mr Richard Anthony FRAgS & Mrs Lynwen Anthony of Tythegston Farm, Tythesgton, Bridgend.

In 1996 Richard became aware that the family business in which he was engaged was not large enough to provide a living for all partners. Taking the initiative, he approached the owners of a large nearby estate to rent only the grassland on an arable farm together with some buildings and small house at Tythegston Farm. Thus in 1997 Richard and his wife Lynwen commenced their own farm business on an initial three year farm business tenancy (FBT) on 110 acres.

Their incoming capital was 250 sheep (their share from the original family farm business) and 12 months later another 100 acres of grassland became available on a similar arrangement. They operated a sheep enterprise, the production of haylage and an agricultural contracting business. They were farming grass breaks on other people’s arable rotation adopting a two-year Italian ryegrass/one-year winter wheat rotation in order to build up soil organic matter content. At this stage the sheep enterprises were up to 600 ewes and they were selling 100,000 bales of silage, haylage and straw.

Richard’s husbandry and technical abilities were recognised by their landlords and in 2002 they entered a contract farming agreement on 570 acres of arable land at Tythegston. In the same year an opportunity arose to take on another estate of 775 acres arable land on a 10 year FBT. The business at the end of 2002 consisted of 1600 acres of land. This increase was a very significant and challenging step on their progress, thus setting their objective in the next few years to consolidate this growth into a sustainable farming and business system. In 2010 an additional 350 acres was secured and in 2013 a further 650 acres was taken on, both on FBTS. This together with further blocks subsequently taken on has resulted in a business currently farming 3000 acres.

The judges were extremely impressed by Richard’s arable husbandry and technical approach. He is committed to good soil management, adopting an innovative six-year crop rotation consisting of oil seed rape, winter wheat, rye westerwolds and maize. The ewes and up to 3000 tack lambs added to fertility and build-up of soil organic matter. This has led to improved soil moisture holding capacity and structure thus making the soil more trafficable enabling reduced tillage operations, labour fuel and power costs. There was much remedial work required both on the soils and the general farm estates.

It is important to highlight that the Anthony’s are very good farmers and have been recognised as such by their peers. Clearly, local landowners have noted their abilities to improve the land, adopt improved agri-environment opportunities and renovate the physical structures on the land tenanted. Landlords searched them out wishing to avail themselves of their farming expertise and capabilities. Noteworthy has been the willingness of the landlords to extend the terms of the FBTS – clearly a form of earned recognition.

The farm hosts the NIAB wheat and barley variety trial plots and oilseed rape and wheat plots for the commercial company Agrii. This means that Richard is able to observe at first hand the promising new varieties and the latest plant protection products in operation. They also open up the farms to fellow arable farmers as hosts of open days to visit the trial plots.

The Anthony’s are very selective in their choice of farm machinery and readily adopt the latest technologies in terms of controlled traffic systems and yield and farm nutrient mapping.

Recent developments include an agreement to supply a neighbouring anaerobic digester plant with maize silage. This includes receiving up to 90,000 cubic metres of digestate to spread as a nutrient on the arable land. This has provided challenges in terms of storage and also application of the liquid digestate. The judges were impressed with the progress to date in response to these challenges.

They have also installed a biomass unit (1 megawatt) and combined heat and power boiler (55 kilowatts) the heat of which dries the cereals, woodchip and logs and the power produces electricity.

Some land purchases were in progress when the judges visited. Their son David returned to join the farm business on graduation and the Anthony’s are formally looking at succession planning for the future. Richard has led the development of a sustainable, efficient, profitable arable, forage, diversified and integrated farming business

Sir Bryner Jones helped shape the direction of the Royal Welsh Agricultural Society for 50 years. He was head of the Department of Agriculture and Aberystwyth College in 1907 and went on to be one of the leading agricultural education figures in Wales. He was a person of influence in Welsh Agriculture, becoming both Commissioner and Chair of the Agricultural Council for Wales and subsequently became Welsh Secretary of the Ministry of Agriculture.

Sir Bryner Jones, who received a Knighthood in 1947, was the Royal Welsh Honorary Show Director from 1908 – 10 and was the society’s Chairman of Council from 1944 – 53. He became the society’s President in 1954, in the society’s 50th year and tragically died in the December of this year.