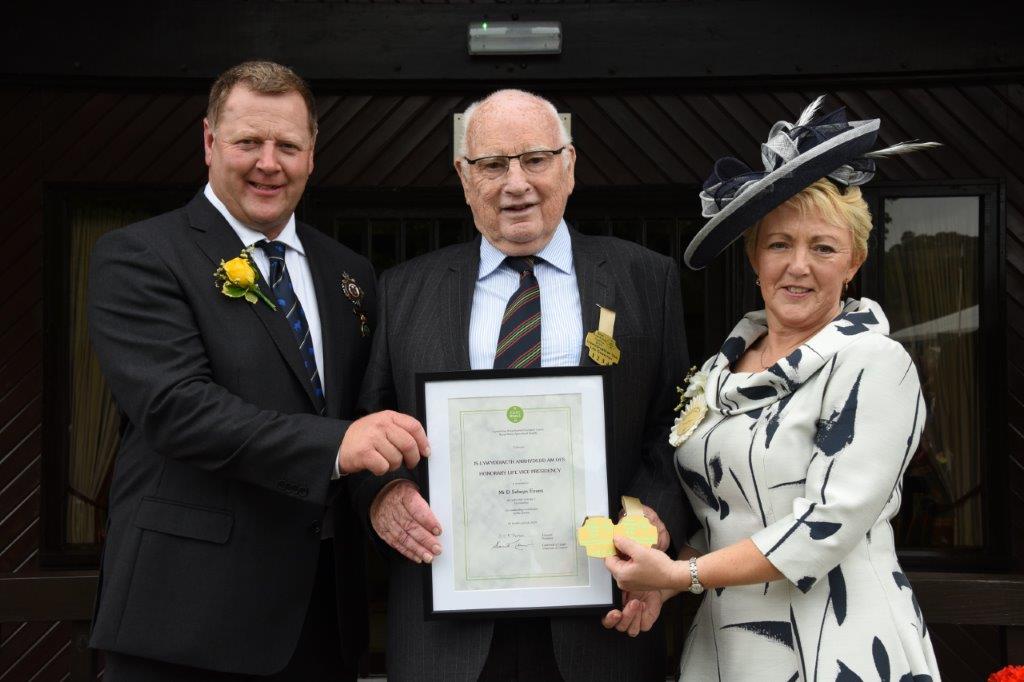 Each year the Royal Welsh Agricultural Society presents a series of honorary awards to people who have given exceptional service to the society, mainly in a voluntary capacity, and in many cases for well over 30 years.

Yesterday (Monday 22 July) a mix of honorary life vice-presidency, honorary life governorships and society awards were presented at a ceremony on the first day of the Royal Welsh Show.

Selwyn is an active member of the Carmarthenshire Feature County and former Chair of the committee. He has commentated in the cattle ring for over 40 years and was also one of the first commentators in the Winter Fair, which is 30 years old this year. Selwyn’s father was one of the main instigators of the Royal Welsh Winter Fair and we are delighted that his son Tom is following the family tradition through his involvement with the society. A true society family.

Huw Geraint has been involved with the society for 25 years. Starting with the society in 1993 as a veterinary officer, he has progressed through promotions becoming deputy veterinarian in 2003 and has recently retired from the role of Senior Veterinary Officer after 10 years. Huw has been a great asset and valued member of the team that makes all the magic happen behind the scenes. He will certainly be missed by all, especially those in the stock lines, and we wish him well in his future endeavours and retirement. Huw was unable to attend the award ceremony at the show, and will be presented with his honorary life vice-presidency at a later date.

Since 1992, Mike has been a tradestand steward, and has given a sterling service to the Royal Welsh Show, especially during the build-up and breakdown periods. Mike also provided a response vehicle and has been like the fourth emergency service. His knowledge and expertise will be greatly missed.

Allan has been a society member for over 28 years and is an active member of the Caernarfon Advisory Committee. He represents Caernarfon on the Horticulture Committee and Board of Directors. Allan has decided to step down as a board member and we thank him for his effective contribution over many years. Allan’s passion is horticulture and he is actively involved with Sweet Pea’s and we are delighted that there is a sweet pea, launched yesterday, to commemorate the 100th Royal Welsh Show.

Bruce has been involved with the society for many years, and in his native Pembrokeshire’s Feature County year, he celebrates 50 years as commentator in the Sheep Section. Bruce has also been an exhibitor and judge at the Royal Welsh Show, successfully showing Simmental Cattle and Texel Sheep, whilst judging the Cattle and Sheep Stockman Competition as well as the Beef Cattle Group of Three and Native Breed bull competitions.

Edward has stewarded and commentated at the Royal Welsh Show for 56 years since the show found its home at Llanelwedd in 1963. A Life Governor of the society since 1975. He was President the last time Pembrokeshire was the feature county in 2007. Edward received an OBE in 1994 for his services to Agriculture in Wales and is also a well-recognised historian especially of the landowners and farming families of Wales. Edward was secretary of the United Counties Agricultural Society Carmarthen for 15 years.

Eireen is a past secretary and chair of the Pembrokeshire County Advisory Committee. She has also stewarded various sections of the show for over 50 years. Eireen has also given a life time commitment to the WI. Both Edward and Eireen are committed to the society and are both on the council. They are currently at the fore front of fundraising this year for Pembrokeshire’s Featured County effort. Both are equally enthusiastic and dedicated to the rural community of West Wales.

Janet is a passionate supporter of everything associated with the society, always willing to lend her support to any section. Janet has provided guidance and support to the Lady Ambassador Committee over a long period of time and has been instrumental in keeping the role relevant in today’s society. She has been a steward at the show for more than 30 years.

As a police inspector, Stuart has been responsible for the daytime policing of the Royal Welsh Show for many years. His passion for the show means that he has always gone that extra mile to help the society. The Eckley family are also well known exhibitors at the show.

Stuart retires from Dyfed Powys Police in September and we present him with this engraved crystal as a token of our appreciation.