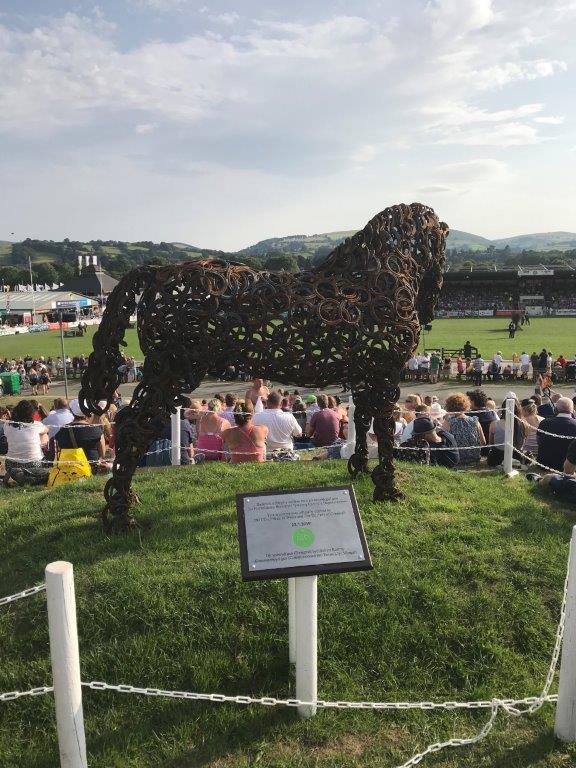 Officially unveiled today, Monday 22 July, by The Prince of Wales and The Duchess of Cornwall, the new Welsh Cob Stallion Sculpture is a striking and eye-catching addition to the Royal Welsh Showground.

Taking four months to construct, sculptor, Robert Rattray has used over 700 horseshoes making the life-sized statue of a Section D Welsh Cob Stallion. Donated from horse-owners across the globe, the horseshoes have been skilfully used to capture the conformation and key features of the breed.

The project has even received the support of the Welsh Pony and Cob Society and Royal Welsh Agricultural Society Patron, Her Majesty The Queen, with the eyes of the statue made from two small horseshoes donated by Her Majesty personally.

Robert, based in Crickhowell, is an internationally recognised artist whose work, both sculpture and drawings, reflect his passionate interest in wildlife and his rural roots. He has previously sculpted two life size Windsor Grey horses, commissioned to celebrate the Diamond Jubilee in 2013

“When I took on this commission, part of the challenge was how best to capture the spirit of the Welsh Cob Stallion – a breed which is well known for their good temperament, hardiness and fluid gait” explained Robert.

“Having worked in various materials over the years, it seemed that to create the sculpture from horseshoes, donated by members of the Welsh Pony and Cob Society, would be a fitting tribute to this wonderful Welsh breed.”

Summing up the welsh breeds and the youth of the community, Euros has named the sculpture ‘Angerdd a Than / Fire and Passion’. “This beautiful sculpture will stand over the main Ring for many years to come and creates a lasting memory on the showground of Welsh Pony and Cob Society Young Ambassadors” said Euros.

The unveiling of this incredible statute was just one of the official duties carried out by Their Royal Highnesses The Prince of Wales and The Duchess of Cornwall, on their visit to the Royal Welsh Show on the opening day of the event.

Together they both opened and planted a shrub in the new International Pavilion garden, created by landscape gardener, Sarah Husband, to commemorate the 50th anniversary of HRH’s Investiture as Prince of Wales.

Her Royal Highness, The Duchess of Cornwall also officially opened the all-weather equine arena. Created as part of the societies overall Equine Project, supported by the society and Gwent and Carmarthenshire Feature County funds, the new arena was built following a generous legacy by the late Mr Norman Griffiths. Representatives of Mr Griffiths family attended the opening and met with The Duchess.